It was a dark and stormy night in Port Hardy.  Port Hardy, as you may know,  is the end of the line- the terminus of the Island Highway, and the dropping off point for parts unknown.

It was also Saturday night, and the start of our vacation. It was time to show my lady a good time. 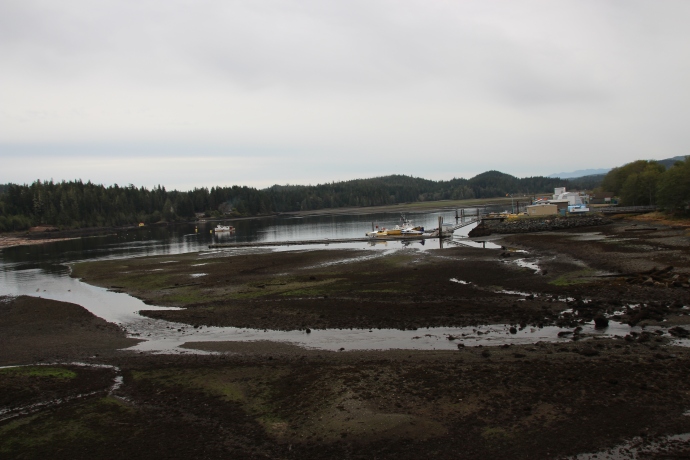 Cruising through town, peering through rain fogged windows, one has the sense that recent years have not been kind to this town, once buoyed by fishing and logging and mining. From an earlier trip I recalled a sushi restaurant with a commanding view of the waterfront that had once been commended to me as the best fare the town had to offer. But alas, upon arrival, we found only the gutted shell of a building.

A short cruise down a very short main drag revealed an A&W, a Subway, and a dubious looking coffee shop. None were likely to produce a repast to impress my vacationing bride. Nor, I suspected, would she appreciate a game of snooker over pints at the “Sports Bar” we had passed on the way into town, although, as I recalled, again from a previous adventure, they did serve a prodigiously greasy cheese burger, and if we ran out of conversation we could always catch the Canucks game on the big screen TV behind the bar.

Then again, it was a payday Saturday night for the town’s remaining loggers, fishers and miners. Perhaps a beer joint wouldn’t be the wisest choice for a pair of strangers from the city. Better to try the Quarterdeck lounge down by the sports marina. The worst we might have to rub shoulders with there would be loud American Sports fishermen.

The rain swept parking lot of the Quarterdeck was empty- the Americans long gone, and the building padlocked and dark. The venerable Quarterdeck lounge had gone out of business. My quest to show the lady a good time was floundering badly, and I began to wonder what time the lights went out at the A&W, or if we would be reduced to a package of Cheezies from the 711.

Next door to the Quarterdeck however shone a beacon of hope in the October gloom – it was the Glenlyon Inn- and miracle of miracles – the lights were on and a neon “OPEN” sign reflected off dark puddles outside. Initial optimism soon turned to consternation however, as I opened what appeared to be the front door of the restaurant.

It opened onto a narrow back passage running between a storage room and the back end of a kitchen, replete with piles of recycling and garbage. I quickly closed the door, not wanting to intrude on the restaurant’s ‘back of  house’ but could find no other way in. There was nothing for it but to usher my date quickly past the refuse and into the rather plain and starkly lit interior of the inn.

M’lady took the seat facing the window, the better to watch the rain lashing against the panes, while I took the seat opposite with the view of of a large tank that had once been an aquarium, now filled with a cloudy greenish liquid. I hoped the fish had died a quick and painless death.

Eventually a nondescript young woman looked up from her plate of french fries, and ambled over, menus in hand, to greet us. The menus stuck as they hit the bare table top.

” Really glad to see you are open” I said ” seems like every other restaurant owner in town has packed up and left! ” My opening gambit, to my surprise, invoked a flushed response from our server- with downcast eyes she nervously mumbled – “Including the owner of this one – he left three weeks ago- without paying anyone !”

She continued, shyly, “We staff have just sort of stayed on and kept on running the place”, and left us to consider the somewhat sticky menu, the front cover of which intrigued me greatly. 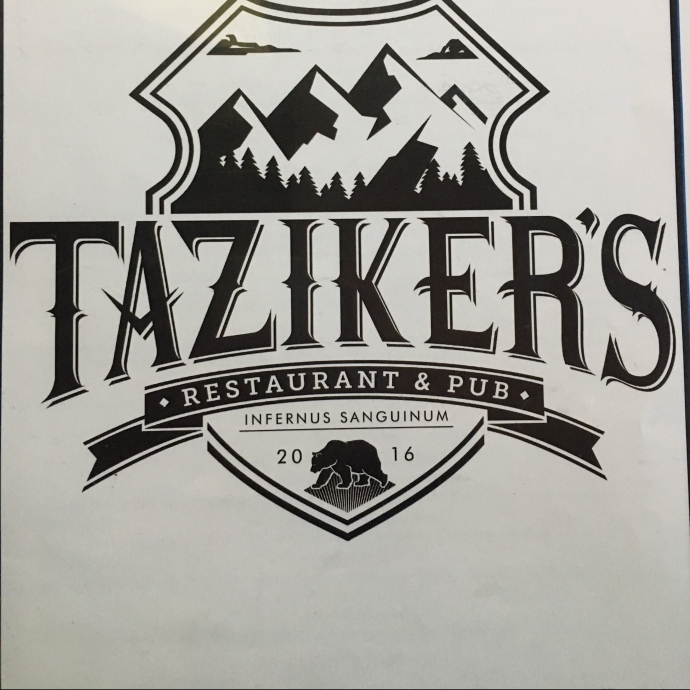 I beckoned our server over, again interrupting her assault on the plate of french fries.

“Two things” I smiled “first, and most importantly- do you have a wine list?”

She looked hesitant, and her brow crinkled, and my spirits sagged-  “um, there’s a box of each, I think- you want red or white?”

“Red- a large one, and your best white for Madame- now my second question – the restaurant name and motto- what on earth do they mean?”

“But there isn’t any Greek food on the menu”

“I know- actually, there’s not much of anything left – but we still got Salibury steak, and some baked potatoes”

“Ah, then that settles our dinner choices – Madame will have the Salisbury steak, and I will join her – with a baked potato- but I still really need to know – what does “Infernus Sanguinum mean?- its driving me crazy!”

Our server flushed again,(earning me a disapproving glance from my date) “I’d better ask cook”, she whispered, as she backed rapidly  towards the chipped and somewhat grubby swinging door to the kitchen. Seconds later a raw boned woman of middle years and ample proportions appeared, and approached with an air of authority.

“You wanted to know about the old owner’s motto?”

“Well, let me tell you. He was a strange guy, from somewhere in Europe, educated, spoke all sorts of languages, but never really fit in here in Port Hardy- he told me once when he was drunk that Infernus sanguinum was Latin, and pretty much summed up what he thought of ending up here, at the end of the line”

“I know it’s Latin, but the only Latin phrases I know come from old law books, so please , tell me -what does it mean?”

Bloody Hell indeed ! an apt description of my efforts to show a lady a  good time on a rainy Saturday October night at the tip of Vancouver Island!