He came into our lives by accident nine years ago. After an exhaustive internet search for cats available for adoption, we had made our choice and found our way to Katie’s place, a wonderful  ‘no-kill’ cat shelter in Maple Ridge that accepts all comers, to meet and adopt the handsome young lad who had caught our eye.

To our dismay, the vain young object of our affections wanted nothing to do with us,  and dismissively turned his back to return to his nap. It was obvious the chemistry wasn’t right. We were left to wander somewhat aimlessly through the shelter until one of the volunteers took us in hand, and guided us to an enclosure housing mostly older male cats, where she introduced us to “Onyx”

He was a mature black cat, with coarse fur and a scar behind his left ear -not the prettiest guy in the room, but he immediately made his way over to greet us and calmly introduced himself.  The volunteer launched into her sales pitch – he was, she said, the steadiest cat in the shelter; absolutely bulletproof, and a favourite with the staff. He had been in the shelter a long, long time – over two years – and it was his second period of incarceration. Originally adopted by a young family with kids, he had been a perfect fit, with everyone except the husband, who disliked cats. So after 3 years of family life, he came back. After a long six months in the shelter, he was adopted again, this time by by a young single guy, where he endured many months of solitude until the guy realized that a bachelors’ social life was incompatible with pet ownership, and Onyx was surrendered once again.

For some reason black cats are always the last to be adopted, so he sat stoically in the shelter as the months passed, watching the other inmates coming in and quickly going on to forever homes. Perhaps he dreamed of the glimpses of family life he had so briefly enjoyed.

We didn’t want an older cat, nor a black one, but somehow he ended up in the cat cage we had brought that day to Katie’s Place. Onyx needed a home – and a new name. Onyx became Big Ben- Benito Mousolini – Ben -the Benster- the Dude – and our home became his. 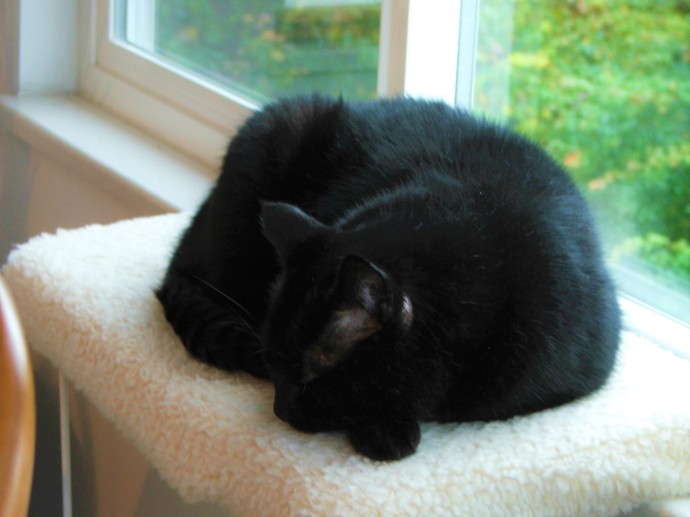 The shelter volunteers proved right – Ben was indeed bulletproof: calm, yet fearless. One of his first duties as newly appointed Senior Executive House Cat (“S.E.H.C.”) was to inform Parker, the next door neighbour’s Rottweiler, that there was a new sheriff in town. Thereafter, Parker, 120 pounds of hard muscle, cowered whenever Big Ben patrolled the property line.

The first night in our home he wasn’t shy about leaping onto the bed to claim his spot, but once there, wouldn’t settle. He sat quietly, fixing me with an intense stare, waiting for me to do something. His expression made it clear that there was a ritual to be performed, and I was missing my cue. Finally I rolled on my side, extending my arm in the process, and immediately he sank into my arm, relaxed, and fell asleep. Clearly, this was how he and his last owner had slept. (I wonder if that owner’s arm has re-gained sensation, as mine is still numb!)

Ben ruled the roost as S.E.H.C. -keeping the lady cats in their place, patrolling the perimeter, inspecting the credentials of all visitors, and superintending the activities of any trades who came to the house, strapping on his tool belt and planting himself in the middle of whatever was going on, the better to supervise. On the table at the Vet that last time, we noticed a smear of white paint on his flank. Although desperately ill, he had, nonetheless, helped the painter who was re-doing the door frames.

Ben was a great cat, and a big personality, but we came to notice that whenever the suitcases came out he would sink into a deep depression. He would shut down and turn inward, as if  he was drawing a protective cloak around his emotions. The change in behaviour was profound, and alarming, and the vet could offer little help, so eventually we consulted a cat psychic (that isn’t weird is it? I mean, doesn’t every pet owner have a pet psychic on retainer?)

After communing with Ben on the astral plane, the psychic informed us that Ben had been severely traumatized by being wrenched from his family home to be dumped back at the shelter. The betrayal still burned brightly, and he found it hard to trust humans, especially women. He blamed his former mistress for being weak, and bending to her husband’s demand to get rid of the damned cat. Whenever there was a change in the rhythm of the house hinting at an upcoming absence he sensed abandonment, and went into a blue funk.

Replying through the psychic, we made him a pledge. He had found his forever home, and we promised that he would never be sent away, not for misbehaviour, not for awkward medical issues, and certainly not at our whim or for our convenience. We are told he described the concept as “interesting”, and that, with just a pinch of skepticism, he would take us at our word.

Thereafter his mood lightened, and, as we repeated our promise to him, face to face, over and over again, his separation anxiety began to wane. He never liked our vacation absences, but grew to at least tolerate them. He had our promise, and that seemed to make a difference.

The last year or so haven’t been kind to Ben, as he fell victim to a plethora of geriatric  conditions. Pancreatitis, arthritis, high blood pressure, a wonky thyroid, a dicky heart – you name it, and he had it, it seemed. He soldiered on, albeit in curmudgeonly fashion, enduring a daily regime of pills, and many, many trips to the vet, until finally there was nothing more to be done.

On Thursday we kept our promise, and he died peacefully in our arms. 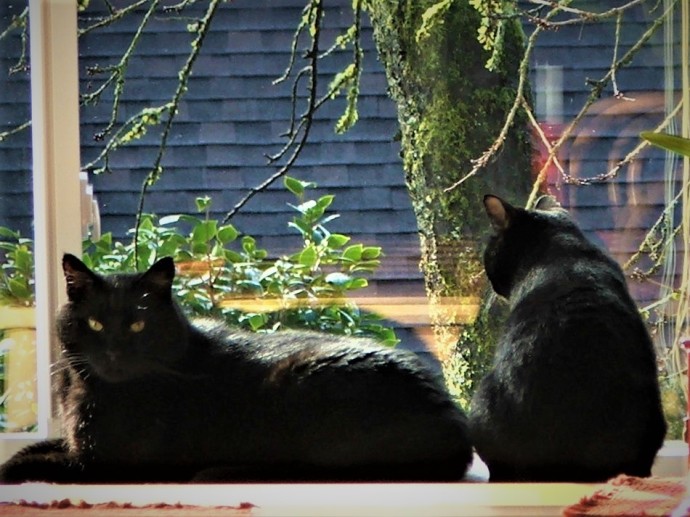 3 thoughts on “A promise kept”

Join 871 other subscribers
Follow A Gentleman's Relish on WordPress.com